All the pupils and staff here at Scoil Cholmcille are very sad not to be in France cheering on the boys in green! Past Pupil George Downer is there and is very kind to keep us all informed of all the action.

It all started on the 10th of June where we flew to Brussels at 6:00. When we got there we got straight onto the coach and headed to Versailles just outside Paris. It took nearly 6 hours to get there because the bus driver got lost! We stayed there for 2 nights, after the 2 nights we got the coaches to montamarte, Paris. We stayed here for 2 nights and on the second night it was the big day, the match. Everyone was buzzing waiting for 3:00 when we were leaving for the match. When the coach arrived to collect us everyone was excited. The traffic was so bad going to the Stade de France that we had to go get off the coach and get the metro to the stadium. The metro was absolutely packed to the brim with Swedish and Irish. When we finally got to the stadium you could feel the atmosphere. Since my dad had a drum it took us forever to get into the stadium because of security. When we git in the place was rocking! All you could see was a wall of yellow and when you looked behind you all you saw was a wall of green! The first half was a great performance by the Irish, the keeper made a few good saves a we hit the bar. When we scored at the start of the second the place erupted! Everyone started sing and shouted. But then we sat back and let them attack and they scored. I think that a 1-1 draw was a fair result for both teams.
George.
Match 2 - Ireland vs Belgium
Straight after the Sweden game we got a coach back to our hotel were we stayed out last light in Paris before we went to Boudreaux. We had to get up very early to catch the bullet trading which travels at around 200 kilometres per hour! When we got to the station which was beside the Eiffel Tower, it was packed with people going to work. We waited about an hour for our train to arrive. When it did arrive we had to walk to our carriage which was up the front of the train. I had never seen a bigger train in my life, it was huge! The train traveled from Paris to Bordeaux in just 2 and a half hours! When we got to Boudreaux we got on a coach to our hotel which was just outside Brussels in a town called Bergerac. We stayed there for 6 days.On the 4th day it was round 2, the match against Belgium. At 10 o'clock we left our hotel to go to the stadium in Bordeaux, when we arrived in Bordeaux all you could see was green and red. Everyone knew it was an important game for both teams, Belgium loss their first game against Italy and we needed points to challenge for first place. The first half was very even, both teams had chances but the second half was a different story, we got outplayed which was sort of expected because of the quality they have in Hazard. In around the 80th minute I was on the T.V! Banging my drum and singing. The score ended 3-0 to Belgium which was well deserved in the second half which was when they scored all three of their goals. In 2 days we go to Lille in the north of France to play Italy!


Match 3 - Ireland vs Italy
After the Belgium game we got our coach back to our hotel where we stayed for one more night before we went to Mons which is on the Belgium/France border. We flew out of Bergerac airport which was the smallest airport I've ever been in! It only had 2 gates! We flew into Brussels which took about half an hour. When we got of the plane our coach was waiting there to take us to Mons. It took us half an hour to get to our hotel. The hotel was amazing, it had a free mini bar, comfy beds, free breakfast which was massive and it was a five minute walk from a huge shopping centre. We stayed here for 3 nights and on the second day it was the day of the Ireland and Italy match. The kickoff wasn't until 9 o'clock at night. We got the coach to Lille at 5 o'clock, it took about 1 hour to get to Lille from Mons. We waited in our friends hotel till it was closer to kickoff. Looking around I could see that everyone had this feeling that that game is going to be special. It took us nearly and hour to get in to the stadium because security was so tight. We got in just before the national anthems and the place was rocking! The first half was very tight, both teams had chances but everyone knew that it was our night. In the 82nd minute Wez Hoolahan was through but the keeper saved it. Everyone thought that that was our last chance to go through to the round of 16 but in the 83rd minute Hoolahan crossed the ball into the box where Robbie Brady was waiting to head the ball in. When he scored the place erupted with Irish fans screaming and shouting, the next 10 minutes were the longest 10 minutes of my life! When the referee blew his whistle for the last time the place erupted whit people shouting, screaming and some people were even crying. Ireland for the first time in their history had qualified for the knockout stages and I was there! I will never forget the night we beat Italy 1-0!

Last 16 - Ireland vs France
After 13 nights and the 14 best days of my life we fly back to Dublin to collect my sister and go to Lyon to play France.
Me, my sister and my dad left for the airport at 5:30 in the morning for our flight to Lyon which was at 8:10. We got a little fright in the airport when there was a mistake with the flight and they said it was cancelled which would of been a disaster, but thankfully it wasn't. We got to Lyon at 9:30 and it was roasting! When we got to the hotel we had a dip in the pool then we went to the Lyon fan zone to watch the matches. The next day it was the day of the biggest match in Ireland for over 30 years, against France, the hosts. We had to wake up at 9:30 to collect our tickets. When we collected them we went back to the hotel to relax before we left for the match. We left for the match at about 12:00 in a taxi. We hopped out of the taxi at a pub outside the stadium to get a quick bite to eat before we went in. When we got into the stadium the atmosphere was electric! It was so loud that I couldn't hear Freya, my sister who was right beside me! We started the game extremely well and just after 1 minutes the ball was played into Murphy who flicked it into Long and just as he was about to shoot he got founded by Pogba and the ref blew his whistle, it was a penalty! The crowd held their breath while Brady stepped up to take it at first I thought he missed but by the fans reaction I knew he scored! For the next 54 minutes the game was tight with both teams having chances till Griezmann got a free header and made in 1-1 after that we collapsed and Griezmann got another goal 3 minutes later after some poor defending. 5 minutes later it got even worse when Duffy got a red for taking down Griezmann when he was through. Ireland gave it all we got but at the end they had no energy. The fans sang till the end with passion, that's why we're the best fans in the world. After the game, while the players were doing the lap of honour my dad got Shane Long's attention and he came over and gave me and Freya his boots and gave us a hug! That was something I'll never forget as long as I live! This was a trip of a lifetime and long giving us his boots just topped it off!! 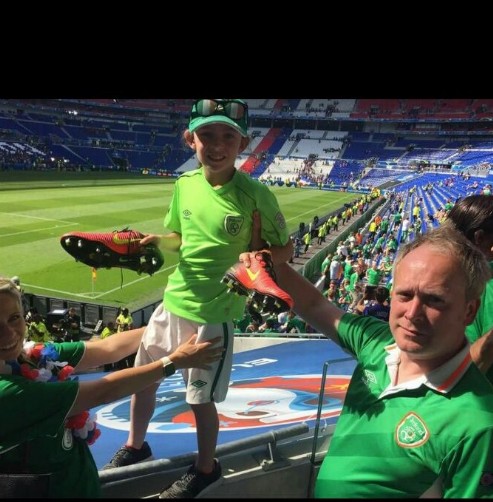